Economic and population growth has contributed to a rise in demand for waste management services throughout New South Wales, according to environmental studies*, which analysed Australian economic activity between 2006-2015. “Much of our economic growth can be attributed to population growth but, for all states and territories, the economy grew faster than population over the nine-year period as a result of planned infrastructure works by the NSW Government. In other words, the average amount of economic activity per person increased disproportionately.” Aussie Skips is a family-owned skip bin company with a focus on managing skip bin waste and has been following these growth trends. Director and General Manager, Emmanuel Roussakis, believes that it is important to lead with a hands-on approach as it is critical to remain competitive and agile in the waste management industry, especially when other businesses and private parties are looking for the most efficient and effective means to cart waste materials.

“Aussie Skips has been operating since 1987, specialising in skip bin hire as well as providing a recycling service via a waste transfer facility in Strathfield South,” he says – adding that the business services the metropolitan areas of Sydney and has recently moved down the south coast as far as Huskisson. “Over the years, demand for private waste collection services has increased, and to remain competitive, it was a natural progression for Aussie Skips to invest in more efficient, higher-quality road transport equipment.

According to Emmanuel, Aussie Skips has been investing in Isuzu trucks fitted with custom spec’d West-Trans Equipment bodies since January 2017 and since the initial order of three West-Trans skiploaders in January last year, Aussie Skips is expecting another four to arrive soon. “Moving forward, the business has already placed another order for this coming July for an additional six, and is also in the final stages of adding yet another six after that again,” he says. “Our aim is to order 12-18 skiploaders every year to keep up with growth plans and also keep our fleet looking modern.” 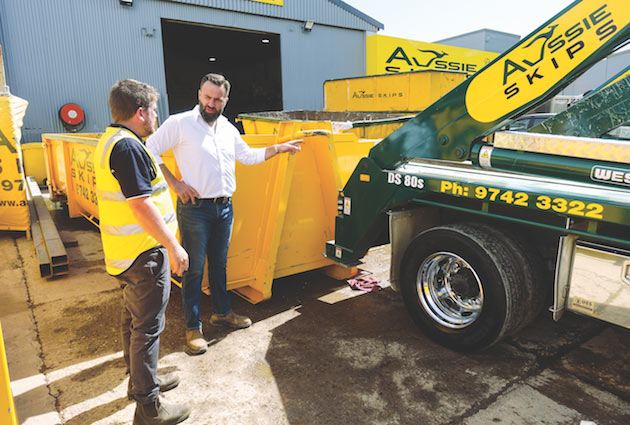 Emmanuel says that Aussie Skips depends on reliable and durable skiploaders, which is why he has worked closely with West-Trans Equipment to determine what he calls the ‘Aussie Spec’. These skiploaders are specified with everything from fleet colours, lifting chains, lighting and steps for better accessibility. The overall package meets Emmanuel’s operational requirements.

“West-Trans Equipment stands out because it provides comprehensive technical support and is open to making significant changes that will benefit Aussie Skips in the long-term,” Emmanuel says. “The team at West-Trans are great to work with, especially when dealing with Mark Micallef. He has personally worked with myself and my brothers in creating our unique ‘Aussie Spec’.”

New South Wales waste collection service provider, Aussie Skips, has over 1,000 skip bins available for hire, with a fleet that can access both domestic and commercial sites. The business invests in road transport equipment featuring skiploader bodies built by West-Trans Equipment that enable safe, secure mobility, particularly in urban areas where access could be difficult.